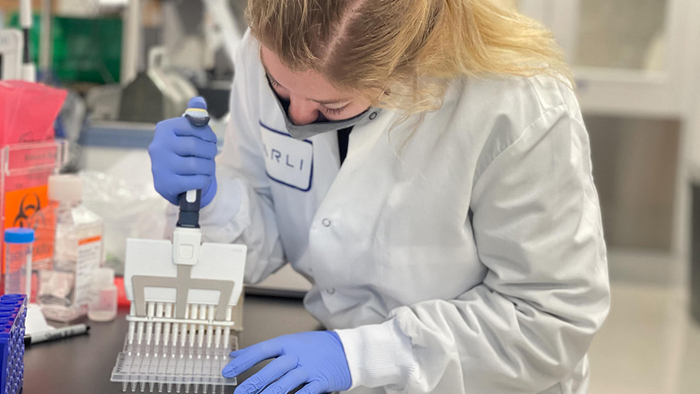 When Shereen Asad joined Earli as its sixth employee in 2019, her job description didn’t exactly say anything about selling human blood samples. The possibility never even crossed her mind; it’s just not something that operations professionals at most companies ever do. Well, Earli is not like most companies.

Shortly after Shereen joined the company, Earli’s scientists discovered they had received a shipment of cancer blood samples that were the wrong type for their experiments. It looked like a write-off loss, but Shereen wasn’t going to let all these perfectly good blood samples go to waste. As the clock was ticking on the shipment’s expiry date, she found a facility that could use the samples and avoided a total loss for the company and other scientists who could use the samples—all while keeping the day-to-day operations running smoothly at Earli HQ.

“I’ve never been challenged like I have been here, but that’s what brought me in,” says Shereen. “I wanted the opportunity and mentorship to develop my skills and I got exactly what I wanted.”

Shereen’s experience was unique, but it’s not atypical for Earli employees. Earli is a rapidly growing biotech startup on a mission to make early cancer detection possible with groundbreaking science. Time is of the essence when you’re on a mission of trying to save lives, and that often requires finding creative solutions to challenges both big and small.

When Earli was just a few months old, Badri Ananthanarayanan, the company's Director of Delivery, needed a vial rack to run a critical experiment, but all the racks that fit the water baths were sold out. So instead of waiting weeks for a smaller rack to arrive, Badri purchased a bigger rack and a hacksaw. Was it an elegant solution? Clearly not. But it worked—and that’s the important thing when you need to get a breakthrough technology to patients as quickly as possible.

To be sure, Earli isn’t the type of place where you always have to cobble together experiments using parts from the hardware store. Earli’s scientists work in world-class research facilities with access to the most leading-edge technologies and resources they need to do their job. But things don’t always go according to plan. That is why Earli brings in bright minds who aren’t afraid to pursue unorthodox solutions. “There’s a lot of practical stuff where you need to make things happen today,” says Badri. “That’s the startup experience and it’s really rewarding being part of a team that is this committed to the mission.”

Earli’s scientists have advanced the company’s synthetic biopsy technology to clinical trials in record time through a combination of tenacity, creativity and technical brilliance. Their deep commitment to the company’s mission means they’re able to make great strides toward getting into the clinic to help save lives in the same amount of time it takes other biotech companies to spin up a prototype. That kind of output doesn’t happen without a culture built around challenging the status quo, combined with strong ethical values like integrity, honesty and transparency. “The best ideas can come from anywhere so we’re really encouraged to speak up,” says Dariusz Wodziak, a scientist at Earli.

Earli’s pioneering approach to early cancer detection continues to attract leading researchers from around the world to join the company on its mission. Earli’s scientific advisory board includes many of the biggest names in oncology who recognized the transformative potential of synthetic biopsy. Earli draws on the expertise of these renowned scientists to push the frontier of early cancer detection.

“Our advisory board includes two Nobel prize winners in oncology, the co-founders of Moderna and Juno, and some of the best oncology physicians in the country. And you get to talk to them, you’re included in the meetings,” says Bijee George, the head of manufacturing at Earli. “It’s an amazing level of access that you wouldn’t get at most companies.”

Early cancer detection is fundamentally a multifaceted problem. While many biotech companies cloister their researchers by subject matter, cross-team collaboration is key to Earli’s success. You needn’t practice yoga to work at Earli (although many team members do), but mental flexibility is non-negotiable.

“My schedule depends on all the other groups,” says Lisa Pang, an associate scientist at Earli. “We’re trying to figure out how to make studies go faster by streamlining the pipeline and it’s been this great collaborative effort with everyone involved.”

Earli’s team comes from diverse backgrounds with a wide range of experience. Some of Earli’s top scientists, such as Chloe Xia, joined Earli fresh out of grad school. Others joined the company at the height of their career. Many Earli scientists have PhDs, but some do not. At Earli, an employee’s credentials matter less than their intellectual rigor, their willingness to learn, their courage in the face of wickedly tough scientific problems, and their belief that they can revolutionize early cancer detection.

“I don’t have a PhD and I was really adamant that I didn’t want to be held back by the level of education I have if I’m doing high caliber work and I didn’t want to be siloed,” says Hadley Hanson, a scientist at Earli. “That hasn’t happened because the entire culture here embodies that promise.”

Earli is built on the idea that all of its employees should have the opportunity to grow professionally; and the company’s mission depends on it. It will be impossible to beat cancer without a team of researchers challenging themselves to improve early detection techniques. “I want to see our team satisfied with what they’re doing, learning a lot and building their career where they want it to be,” says Shireen Rudina, Earli’s Synthetic Gene Regulation team lead. “Success for me is measured by seeing my team thrive and grow. That’s the number one thing.”

Since its founding, Earli has built a community of researchers who like spending time with each other at the bench by adhering to a simple rule: “Check your ego at the door.” The company needs scientists who are both technically gifted and fun to be around because beating cancer requires more than technology. It requires kindness, compassion, collaboration and an unflagging optimism. Scientists at Earli can expect to face some of the biggest challenges of their career, but that doesn’t mean they can’t have a good time doing it.

“The people here are really friendly and have a great sense of humor,” says Chloe Xia, an associate scientist at Earli. “They don’t make you feel nervous and they want you to share your knowledge. It’s easy to communicate and that makes me feel great.”

If you want to join the Earli team on a mission to make cancer a benign experience, you can apply here.