What the Hack is a Lab-a-thon? 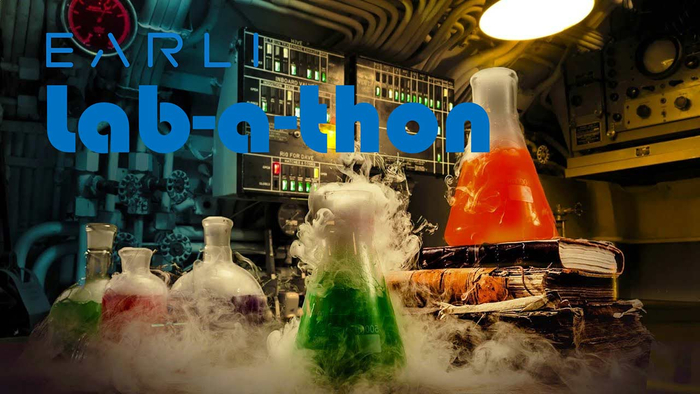 Take a hackathon and swap out the source code for genetic code. Add cell cultures, riboswitches, and RNA to the mix. Then give a team of gifted biologists 24 hours to develop a prototype or run an experiment on any topic that interests them. This is the recipe for the world’s first “lab-a-thon,” Earli’s experiment in freestyle biotech development that aims to bring a beneficial hacker mentality to the fight against cancer.

The lab-a-thon is an idea that harkens back to Earli co-founder and CEO Cyriac Roeding’s roots in the tech world. Hackathons are 24 to 48 hour coding sprints where developers work in small groups to rapidly turn their ideas into a prototype. Hackathons are a familiar event for software teams, but it is an unexplored format in the biotech world.

Earli is always drawn to bold ideas and the spirit of playful experimentation that defines hackathons seemed like a natural fit for the company. Instead of mainly building software—although there was some of that too—Earli’s scientists focused on exploring new ideas in the development of the company’s synthetic biopsy technology.

Five weeks before the lab-a-thon, everyone at Earli was encouraged to pitch a project and recruit 3 or 4 team members to work on their idea. “It’s skunkworks-time, team-time, fun-time, prototyping-time, creative-time,” Cyriac told the team before their pitch. Nothing was off limits. The only requirement was they must follow their passion. “Make a product, improve a process, solve something that has nagged you for months, it’s your call,” Cyriac said. “It’s nice if something really useful comes out of it, but that is secondary. The lab-a-thon is first and foremost about fun, excitement, childlike curiosity, discovery, and team spirit.”

Seven teams pitched their ideas to the company. The pitch session was something of a cross between Shark Tank, Saturday Night Live, and a TED talk. One team came armed with a sketch video featuring delightfully nerdy biology jokes and another pitched their idea in the form of a fairy tale. The delivery was playful, but the ideas were profound.

Each team proposed a solution for tackling a core challenge at Earli and had to defend their idea to the rest of the company. The proposed projects included building an intranet, developing a new RNA vector, creating a multiplex assay, running experiments on integrase-deficient lentiviruses and a genetic circuit that could reduce the noise in Earli’s gene reporter system, and exploring the application of riboswitches and electroporation in Earli’s synthetic biopsy technology.

The teams were given five weeks to order necessary reagents and cultivate cell lines before the lab-a-thon, but no further work on the project was allowed before the event. Once the actual lab-a-thon started, each team only had 24 hours to do the prototyping that would yield results. Teams could sleep in the lab or work through the night if they wanted. The winning lab-a-thon teams would be decided by the company and get the opportunity to continue to pursue their research further after the event.

The lab-a-thon officially kicked off on the morning of May 26 with a large inflatable T-Rex and a unicorn presiding over the event. “This is precisely who we don’t want to be,” said Earli co-founder and CSO David Suhy, gesturing to the T-rex. He turned to the unicorn. “These are the ideas we’re going for.”

The ambitious nature of the proposals meant that every team would have to go full speed to get results by the following morning. The RNA vector team set up a tent and photoshopped “family photos” of their team on the wall in a conference room and declared the founding of “RNA Island.” In the lab, the multiplexing team wasted no time preparing their assay for an in-vivo experiment in mice. Another team channeled their inner mad scientists by shocking cells with small amounts of electricity for better transfection results.

Each team pursued an idea that could have a major impact on the development of Earli’s synthetic biopsy technology. “It was exciting and very fun to do something we’ve been talking about for a long time,” says Hadley Hanson, a scientist in Earli’s molecular biology group.

But the science and engineering was only meant to be a bonus feature of the event. After a year of more remote work and relative isolation, the lab-a-thon was first and foremost an opportunity for the Earli team to reintegrate and rekindle the camaraderie that is a hallmark of the company.

The day after the lab-a-thon, each team reported its results in rather unusual presentations that  included videos, dramatic reenactments, and even interpretative dances. After the presentation, the whole company voted on which lab-a-thon ideas to pursue further. Although each concept received substantial support, the project dedicated to developing a genetic circuit to reduce the noise in Earli’s gene reporter system was the winner. Other popular ideas included using RNA vectors to improve the delivery of genetic payloads, multiplex delivery to enable rapid testing, and a company intranet that would improve the onboarding process for new hires. Earli’s CSO David Suhy is currently consulting with the teams to decide how to prioritize these projects and continue developing them.

Morgan Wang measuring the concentration of RNA with nanodrop for PCR.

Earli’s lab-a-thon revealed that dedicating company time and resources for scientists to pursue new ideas or passion projects can produce great team spirit and quite impressive scientific results. This “secret” has been known in the tech industry, and companies like Bell Labs and Google have made it a core part of their culture with amazing results. Their key insight is that innovation doesn’t happen in a vacuum. It must be nurtured and supported in every part of a company.  Earli’s experiment showed that it also works in the biotech world where dry labs meet wet labs.

Most importantly, the lab-a-thon turned work into play and brought the company closer together in the process.  The team gave the event an average score of 9.2 out of 10 in an anonymous survey. They cited working with any team members from across the company as their favorite part. Now the lab-a-thon seems destined to become an annual event at Earli.

“The lab-a-thon is mainly for one thing: the spirit of child-like curiosity, discovery, fun and lots of bonding across the company,” says Earli CEO Cyriac Roeding. “In fact, we asked the team to be as unproductive as possible and simply to enjoy the time together.” Then he added, with a wink, “We kind of failed on the former.”